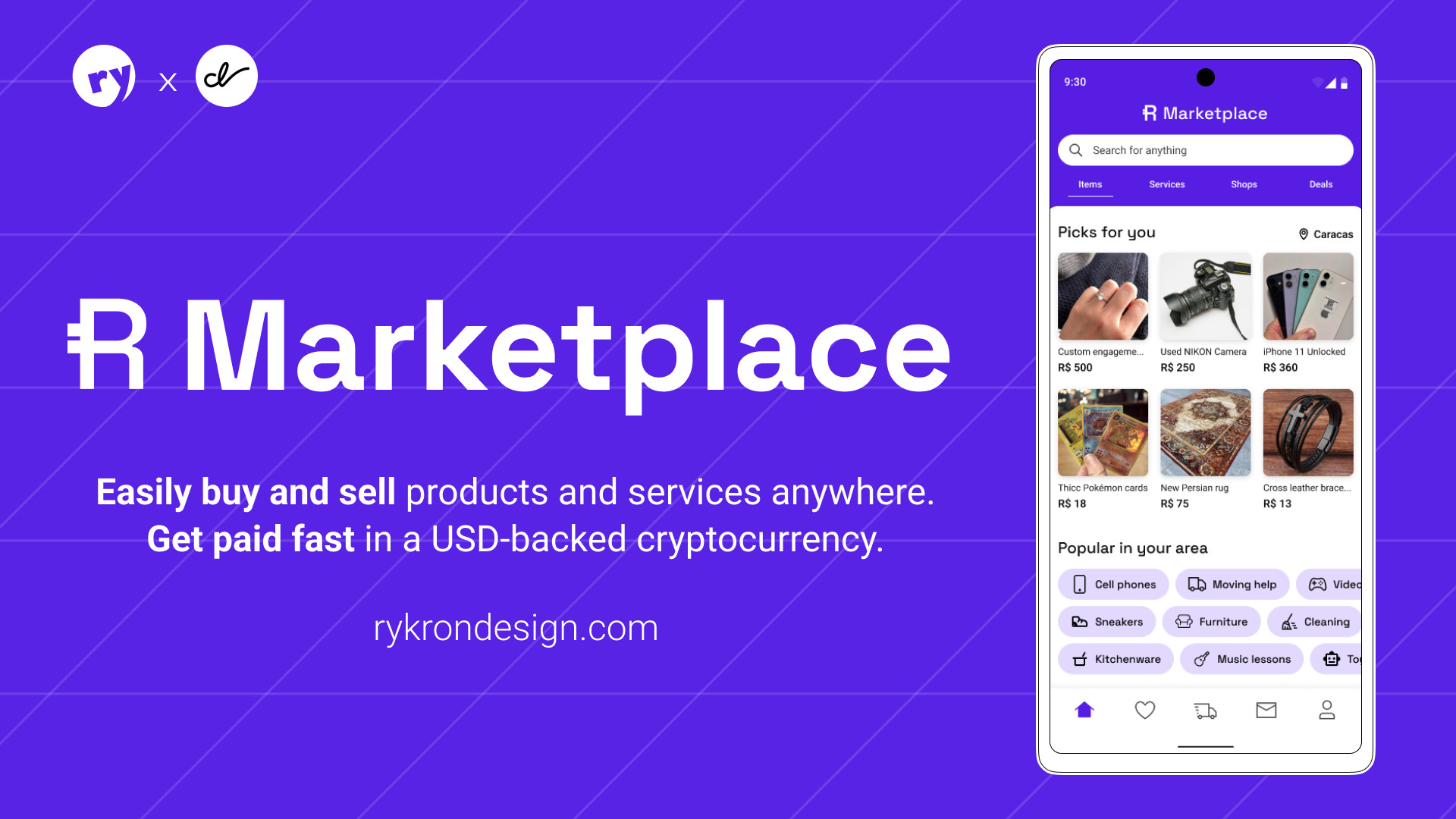 Cryptocurrencies and blockchain technologies are some of the hottest areas in tech right now. But for as popular as they are in the USA, for some developing countries with currencies in crisis, they can literally be a lifeline thanks to so-called "stablecoins," whose value is pegged to the US dollar. Reserve is one such stablecoin.

For this Dash Careers design challenge, I spent a week creating a new chat-based marketplace app for Android where business is conducted exclusively in Reserve currency. 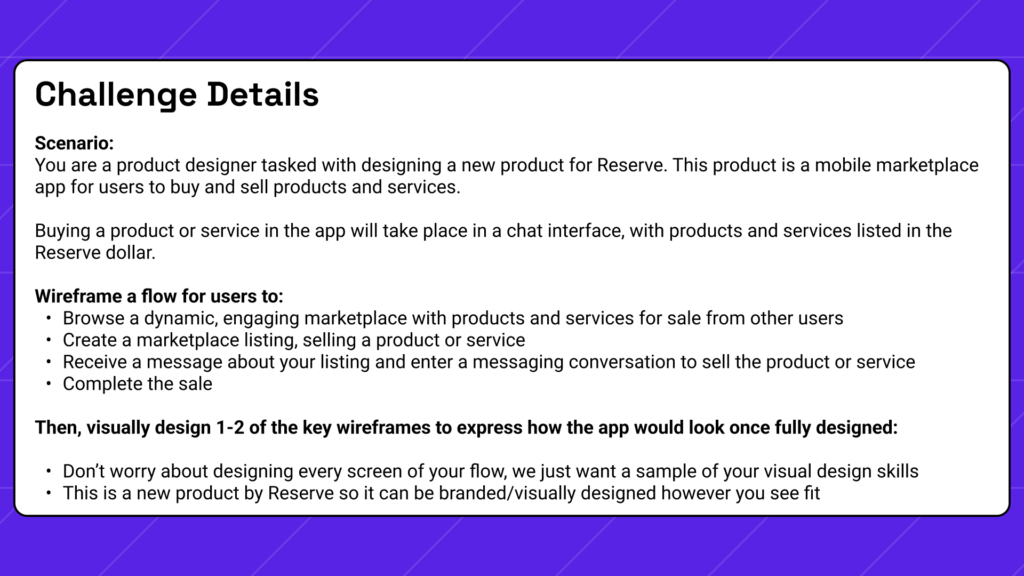 I jumped at the opportunity to tackle this unique challenge. I've been interested in the crypto/web3 space for a long time and I found the marketplace context particularly intriguing. Prior to coming across the challenge, I'd never heard of Reserve, so I started by learning everything I could about the company. They have some big names attached — such as PayPal co-founder Peter Thiel — and I found their humanitarian mission unique and appealing.

In a normal project, I'd usually start by hopping right into researching the problem, but without the time or access to target users, I had to make some assumptions instead. Still, I came up with some research and key questions to keep target users and their needs at the center of my designs as best as I could.

My key assumptions were:

Anyone could use this app, but given the crypto connection, it’s most likely to be used by tech savvy young adults and adults 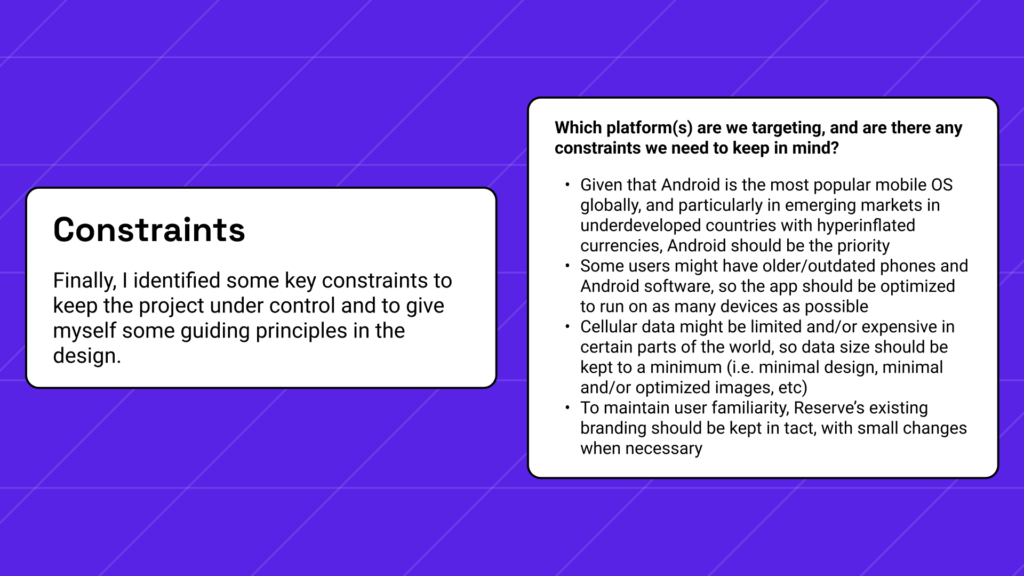 To keep the project under control and within the week-long scope I was given for the challenge, I set up a few constraints for myself. I decided to design the app for Android, as that's the most common mobile operating system outside the USA, and to keep the design as lightweight and minimal as possible. This would help the app to load quickly and use as little data as possible in areas of the world where data access is either limited, spotty, and/or expensive.

Based on the assumptions I'd made about the target users, I created a couple of personas to further guide my designs and keep them rooted in user needs and expectations. I wanted to cover both primary use cases — buying and selling  — so I created personas for both. Unfortunately, I ran out of time to design a selling flow for the app, but I was definitely thinking about it! 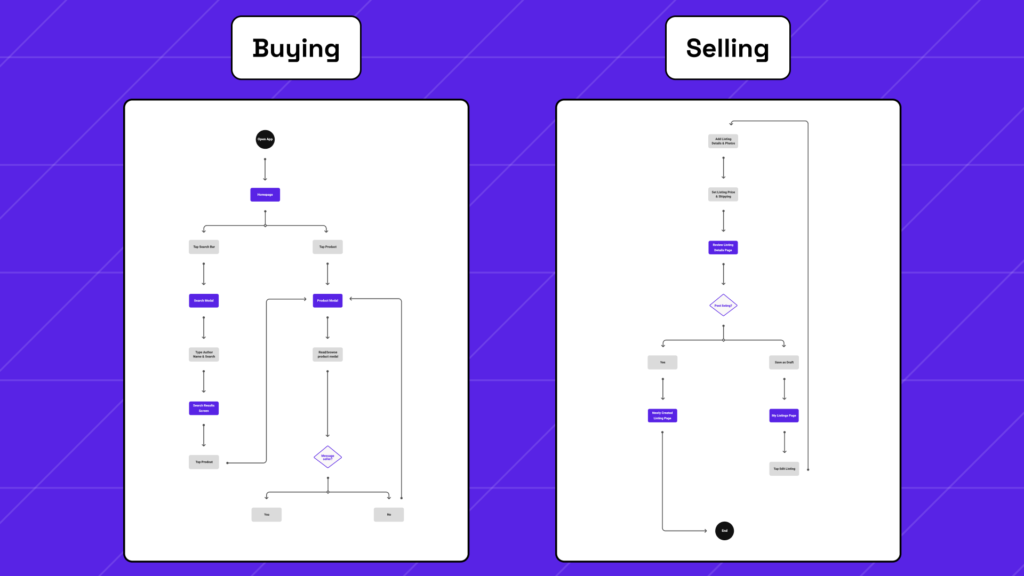 Next I had a good hard think about how users would move through the primary functions of the app — buying or selling a product. I'm a visual person, especially when it comes to flows, so having this to refer back to as I moved into wireframing in the next stage was very helpful. It also pushed me to think about the information architecture of the app earlier in the process. 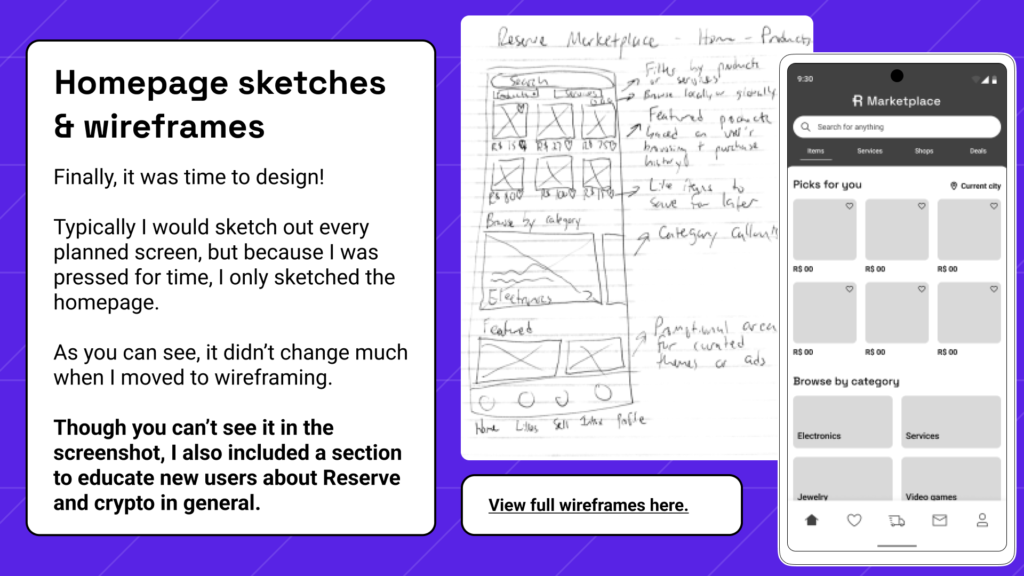 I had a lot of ideas for how the homepage might be laid out — some of them better than others — but the first one I sketched out ended up the winner. I liked that it had a good variety of sections and content while also being easy to digest/familiar enough to users who'd likely engaged with similar shopping apps.

The wireframes didn't change much from my original sketch, though I did change the category tabs a bit at the top of the page. 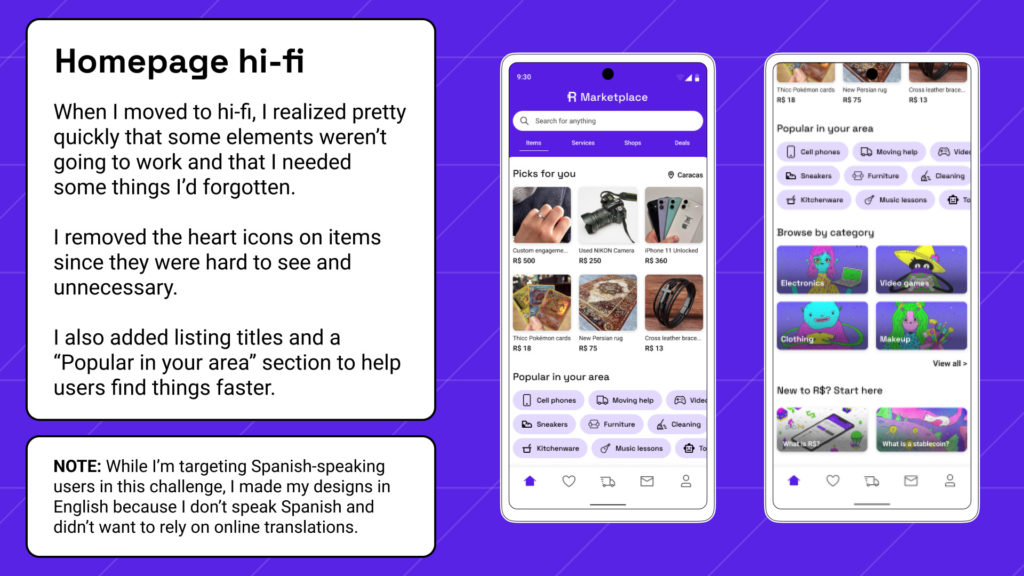 Though Reserve gave me the freedom to apply whatever visual design I thought would be appropriate, I chose to hew closely to the existing branding. Because Reserve Marketplace would be a companion app to the main Reserve app, I wanted it to look similar enough that users would recognize and trust it. To that end, I borrowed from Reserve's social media styling to create the look and feel for Reserve Marketplace, with just a splash more color than the main Reserve app. 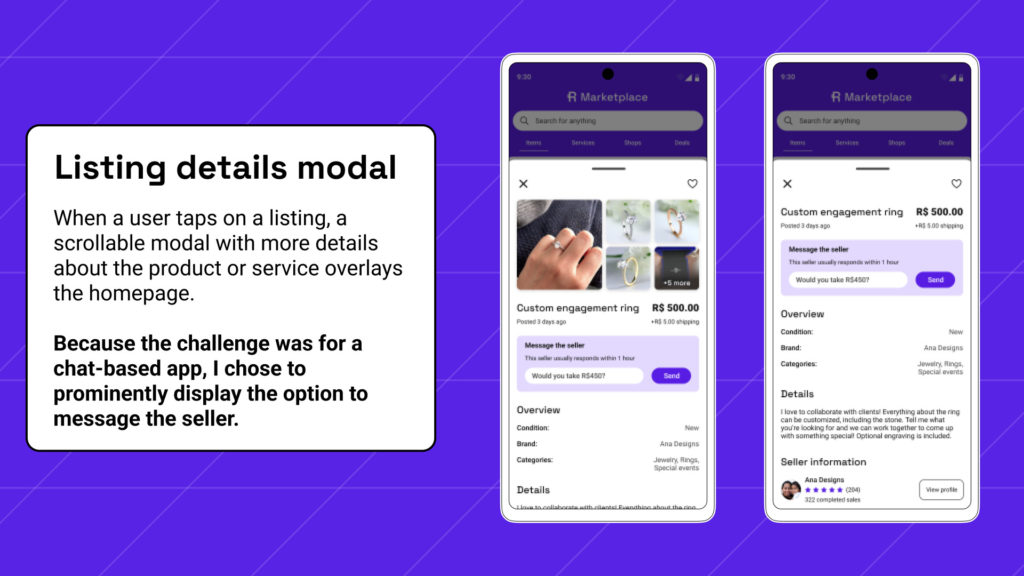 Because a variety of items and services can be sold on Reserve Marketplace, I wanted to make listings as flexible as possible. I also wanted to make it fast and easy to enter a chat with a seller, since that's how Reserve envisioned transactions being completed. Placing the chat box directly under the photos and title and distinguishing it visually with a bit of color helps draw users into that flow. 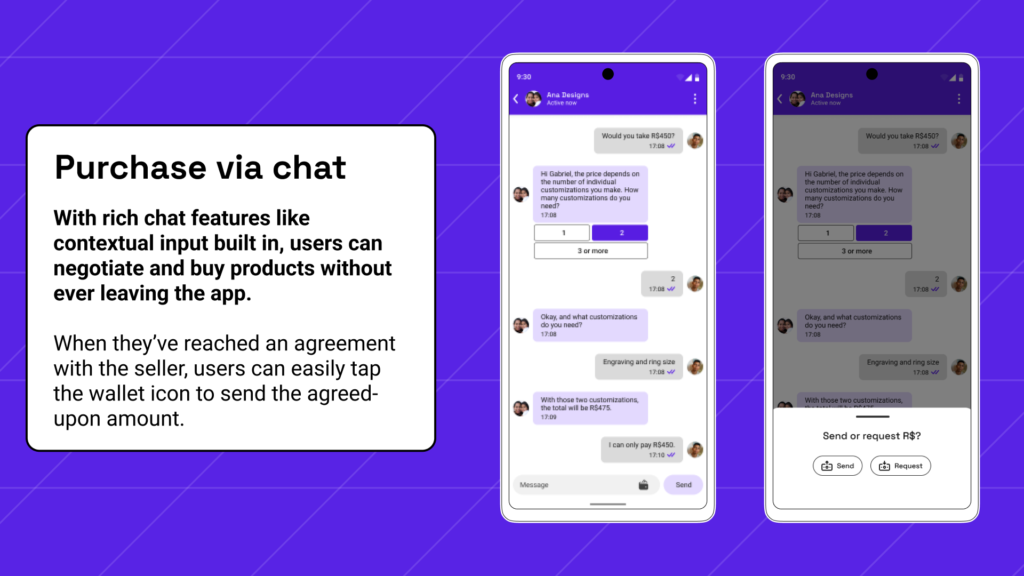 Because transactions on Reserve Marketplace would be conducted exclusively via chat, I knew that sellers in particular would need some way to automate responses. Having to personally respond to potentially dozens (or more) inquiries from buyers would be a nightmare, so I thought through how I could add contextual inputs to help sellers cut through the noise. Though it isn't reflected in the screens, these contextual inputs could make it possible for a buyer to complete a transaction without ever personally interacting with the seller. 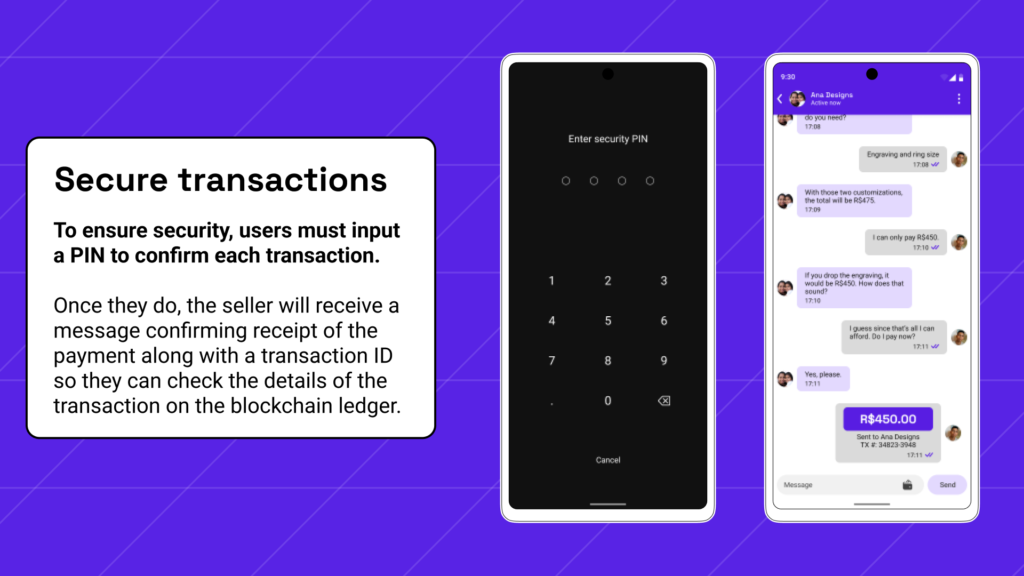 When both parties have reached an agreed upon price in Reserve currency, paying is as simple as tapping into their wallet, entering the amount, and confirming the transaction with their personal security PIN. Since both users already have a linked Reserve wallet, the transaction occurs immediately and securely, and the seller gets RSV deposited directly into their account. 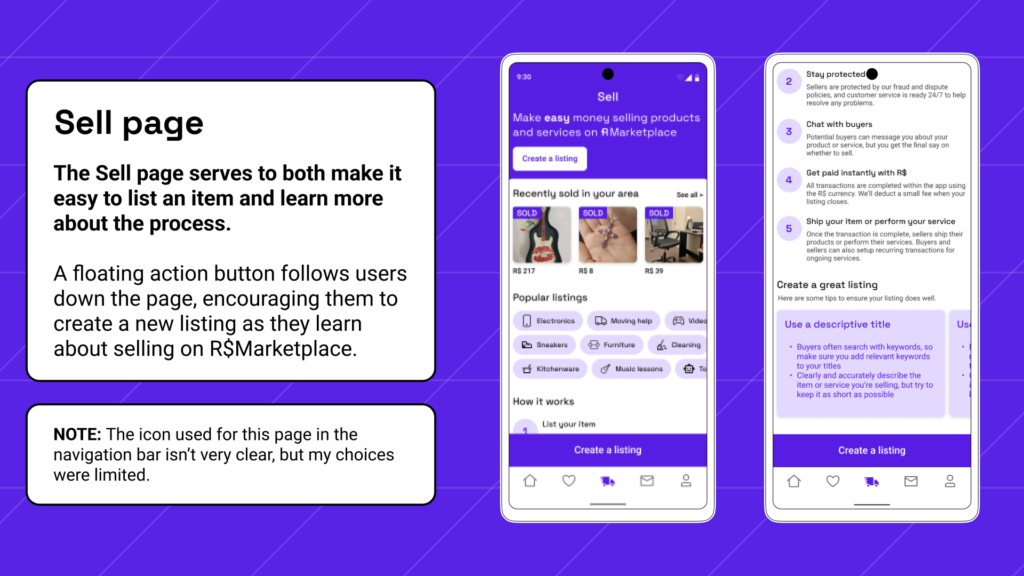 Selling an item or service

A marketplace app can't exist without the ability for users to list items or services for sale, so I created a sales page that guides users through the process of making a listing. It also shows users recently completed sales in their area so they can get a sense of what's popular as well as how successful sellers present their listings. 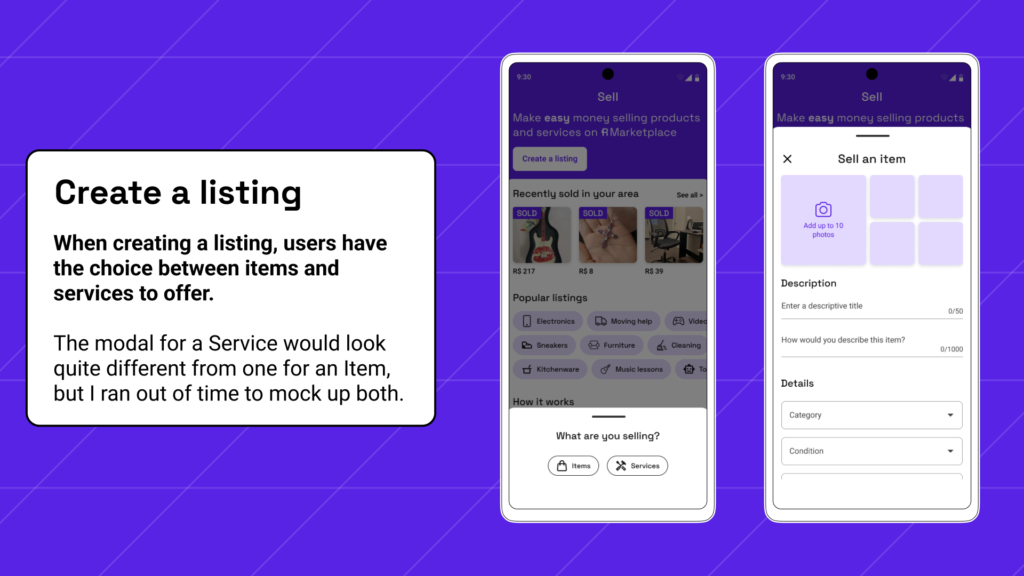 Users can get started selling an item or service in just a few taps. I ran out of time to design a dedicated modal for selling a service, but that would definitely need to be included as sellers providing services would have different requirements. 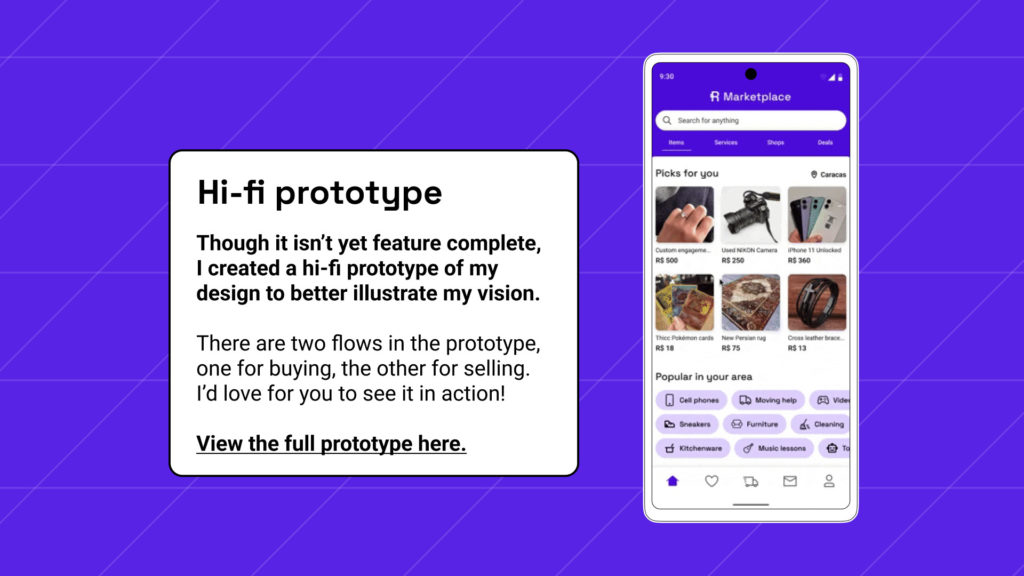 Pictures are worth a thousand words, but interactive prototypes are worth millions! To get a better sense of how everything looks and works in action, check out the high fidelity prototype I created for both the buying and selling flows or by clicking on the image above. 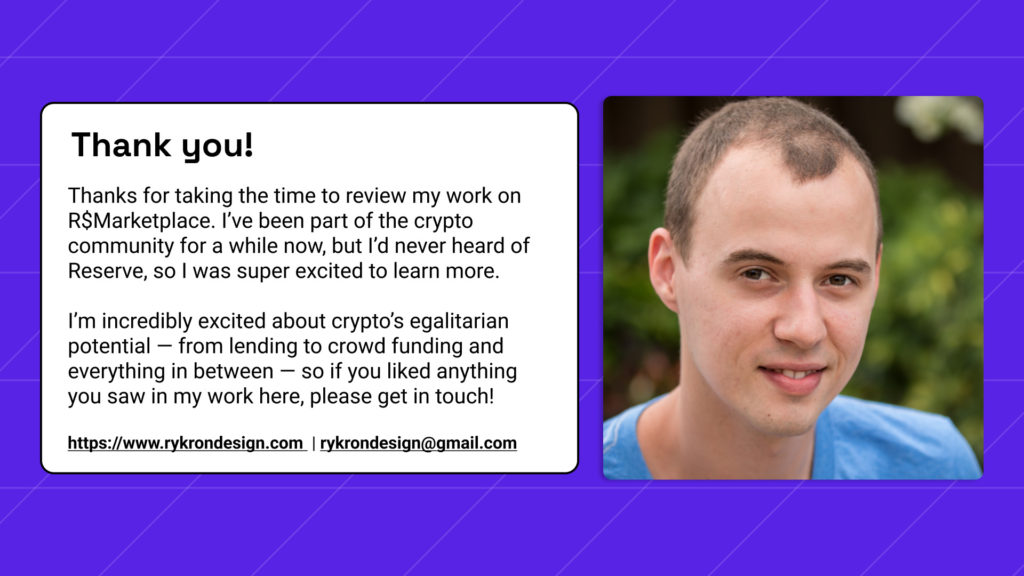 I'd never tackled a marketplace-style app prior to this project, but I'm glad I took a chance on Reserve Marketplace! I'm also glad to have found out about Reserve itself, who's on an admirable mission to help lift people up economically. Crypto and blockchain technologies are still very much in their early days, but I believe in their ability to transform and democratize so many aspects of our modern lives. Here's hoping I can continue to be part of making that happen!